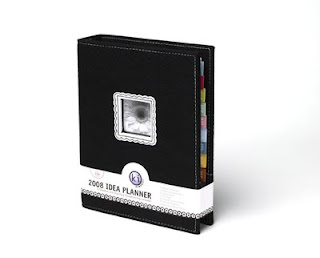 I know, i know that i have said it before...but the time is just flying by lately. What's happening? We're already in the second week of april

and i still feel like it was Christmas yesterday.
I have been busy, so i haven't had time to update my blog for some days now and to be honest, nothing much has happened, so nothing to write about...only work, home, cleaning house, and the usual everyday things...boring? i know

I have like a million things on my to-do list, all these things I want to and have to accomplish and then, surprise...i'm sitting here, behind the computer, just talking with my friends on msn.

I just said to my friend Kristi, that i have planned to scrap three albums as gifts, but i have no idea when i will be finsihed.
I have so many ideas in my head but i just don't know where to begin. Well, the best way to begine would probrably be to stop sitting here, lol!
I wanted to add a picture of my new planner which i recieved in mail today. It's so adorable

It's a bit bigger than i imagined, but definitely so much cuter that i accpected. Only thing that made me disappointed was that some corners of the pages were crinkled and so were the most of the indextabs, but i have already sent my complaints in the mail.
Posted by Kerttu at Monday, April 07, 2008